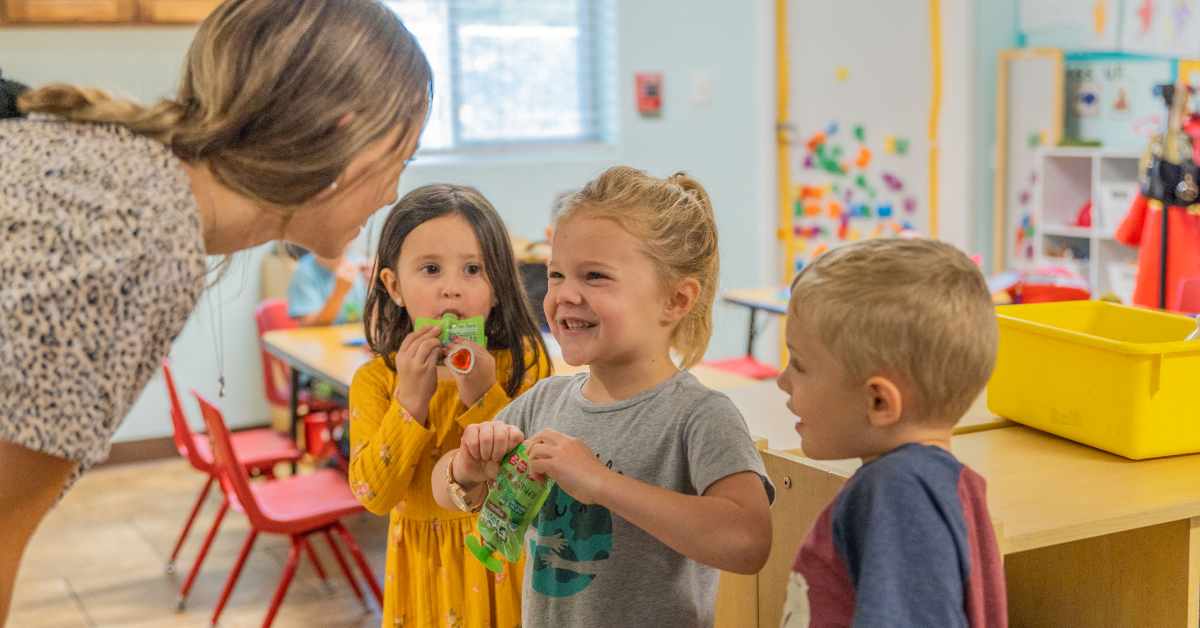 Catreina Robertson knew she wanted to enroll her daughter Kaitlyn at the preschool at Many Farms Public School in the Chinle Unified School District in northern Arizona.

Years earlier, Robertson had enrolled her oldest daughter, Kayley, in the preschool, which is part of First Things First’s Quality First program. Kayley, is now in the fifth grade and is doing excellent academically and Robertson said it started with the skills she learned in preschool.

As Arizona’s early childhood agency, First Things First created the Quality First program to help child care providers in the state improve the quality of their programs in ways that help young children be ready for kindergarten. Participating in Quality First is free for regulated child care centers, homes and preschool programs in Arizona.

Luckily Robertson was familiar with Quality First, but many times, parents don’t know where to begin their search for a quality child care center or preschool. The QualityFirstAZ.com website makes it easy. There, parents can find a list of Quality First sites in their community, as well as checklists to help them ask the right questions and narrow down what to look for when visiting potential learning environments.

Right around the time it was time for Kaitlyn to enroll in preschool, the world shut down due to the COVID-19 pandemic, which hit especially hard on the Navajo Nation. This unfortunately also caused a personal setback for Kaitlyn’s developmental growth.

The Navajo Nation issued a stay-at-home mandate in March 2020, which prevented Navajo families from traveling outside and within the reservation. However, Robertson did her best to teach her children at home during the pandemic, but it was very difficult.

“I had to make do with what was available within our home,” Robertson said.

In 2021, after a year of pandemic mandates, Robertson was able to finally enroll Kaitlyn into the Many Farms preschool program and with the same teacher, Roslyn Elliott, who had taught Robertson’s older daughter.

Robertson told the teacher her concerns about her daughter’s speech difficulties, which included Kaitlyn’s stuttering and overall struggle to speak clearly and with confidence.

“I knew my daughter was in good hands and I was confident that the program would better her speaking skills,” Robertson said.

Elliott quickly got to work with Kaitlyn by helping her focus on the words she was trying to say and to pronounce them slowly.

Kaitlyn is now a 5-year-old kindergartener and is able to speak in full sentences. She also is reading at the second grade level, while also being able to count to 100. Robertson credits the skills she learned in preschool for the strong start.

Many times the high cost of quality child care gives a parent pause. After nearly a decade of juggling motherhood and a job as a licensed practical nurse, Serena Hernandez decided to go back to school. She was ready to make the next stride in her career.

“I wanted to open up the opportunities for myself,” the single mom said. But she also didn’t want to sacrifice her 3-year-old daughter’s care. When her daughter, Aniyah, received a Quality First scholarship to continue attending Great Expectations Early Learning Center in Sierra Vista, it brought immediate relief to Hernandez, whose budget tightened while taking classes.

“It was a huge blessing for me,” she said of her child’s scholarship. “It allowed me to not have to work so I could focus on school because the program was full time.”

The scholarship allowed Aniyah, to stay at Great Expectations, where she had been enrolled since she was 10 months old. Hernandez sees a positive impact on her daughter’s growth and development.

Hernandez has no doubts that her preschool activities will serve her well as she enters kindergarten, just as they did Aniyah’s big sister, Kaliyah. Now 12, Kaliyah attended the same early learning center and received a scholarship. When she turned 5, Kaliyah not only recognized letters and colors, but was also starting to write, her mother said.

“She was really prepared for kindergarten,” Hernandez said.

Knowing that Aniyah is receiving high-quality care makes her mother feel confident that she will have the skills needed to succeed in kindergarten. “She’s not just playing, she’s learning all the time,” Hernandez said.

Currently, more than 1,300 providers across Arizona participate in the Quality First program, such as Children of Hope Child Development Center in Ahwatukee.

Tiffany Vance was hopeful that the teachers at Children of Hope would help her 5-year-old son, Thatcher, develop important skills he needed to be ready for kindergarten.

Daily tasks like putting on socks and shoes and getting ready for the day could at times result in frustration for him, Vance said.

“Thatcher loves learning and socializing. He has always been the first one to help a friend, but he struggled with focus and regulation,” said Vance, a mom of three. “Before starting preschool, it was difficult for him to walk from the front to the back of the classroom without distraction or disruption.”

When Thatcher started preschool at age 4, the teachers and staff understood his strengths and his challenges.

Quality First helps early care and education providers strengthen their programs through professional development and coaching, specialized assistance from a team of early childhood experts, and funding to improve facilities and learning materials.

The teachers told Vance that implementing intervention strategies like giving the young boy choices and having him sit on a wiggle seat would help him to regulate his behavior and help him focus. The wiggle seat provided Thatcher with subtle movement, like gentle bouncing or rocking, without having to get up from his seat and helped with self-regulation.

Thatcher’s teachers at Children of Hope were patient and positive in their approach to guiding learning experiences for him, Vance said. Over time, he flourished learning numbers and letters, while also making tangible connections and understanding.

“He learned what numbers and words represented and that led to him being more engaged and enthusiastic in his classroom setting,” Vance said. “His teachers used ways to keep him focused and they understood how to keep him centered.”

Thatcher has started kindergarten and although he is still developing, he is thriving in his new class. He listens, comprehends and is adjusting to new routines.

Techniques he learned in preschool have translated to home, improving interactions with their family, Vance said. He is much better at understanding tasks and making connections on his own. He is better able to stay on track to complete everyday routines, which has helped him be less frustrated and more confident.

“His preschool teachers and the quality of his experiences were instrumental in shaping who he is today,” Vance said. “He really loved his teachers and felt so loved by them as well. Although he is a bright child, I don’t think his success would be to the level it is now if it weren’t for the early intervention he received at Children of Hope.”