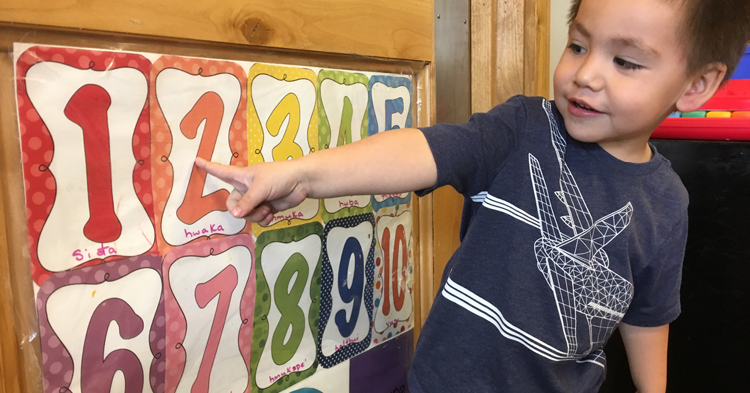 For Sheilah Nicholas, maintaining Native American languages by teaching them to babies, toddlers and preschoolers and their families is important to preserve culture and identity. It’s an idea that was championed at the 2019 First Things First Early Childhood Summit earlier this year and internationally as well, after the United Nations named 2019 the International Year of Indigenous Languages.

This year, the importance of teaching young children native language is being highlighted during November’s Native American Heritage Month.

“(Early childhood) is the optimal period for natural language acquisition and development of the first language,” Nicholas said. “It is a time when the natural environment and conditions are that the child is immersed in a language-rich environment provided by significant caretakers that may include extended family members—such as grandmothers who have been central in traditional childrearing practices.”

Nicholas was a keynote speaker this year at the Summit as she moderated a panel discussion on language preservation. She is a member of the Hopi Tribe, an associate professor at the University of Arizona and a faculty instructor for the American Indian Language Development Institute.

Nicholas sees acquiring language as a cultural practice, and she shared her own experiences growing up Hopi.

“From birth we are Hopi and we grow as Hopi but we don’t go to school to learn what it means to be Hopi,” she said. “It’s really in the context of family and community and life with others, participating and being included that we become a Hopi person.”

Many FTF regions support the preservation of native languages through a variety of ways, from incorporating native language in child care centers to providing bilingual children’s books to continue the learning at home with the rest of the family.

Ensuring that Arizona’s youngest kids arrive at kindergarten prepared to succeed requires that the “whole child” be nurtured, which includes supporting the physical, mental, emotional and spiritual well-being of young children. One way to work toward that goal is supporting early language and literacy development, including the preservation of native languages.

Teaching native language to the next generation

For example, in some Quality First child care centers, such as the Hualapai Day Care center in Peach Springs in the FTF Hualapai Tribe Region, teachers focus on preserving the region’s native language by teaching it to the next generation of young learners.

For parents like Heather Nieto, whose 3-year-old son Andres attends the center, she is appreciative that Andrés is learning how to count in two languages.

The center has a preschool teacher on staff who is fluent in the Hualapai language and incorporates basic words into everyday lessons. The Hualapai Day Care has also partnered with the Boys and Girls Club to offer language classes once a month to parents and children.

The center is a participant in First Things First’s signature program Quality First, which partners with child care centers and preschools across Arizona to improve early learning.

“I really like that they’re teaching the kids Hualapai words, because he’s using them at home, too,” Nieto said. “He can say his numbers in Hualapai, along with ‘Hello, how are you?’ and ‘Come here.’”

In a similar program through Quality First in the FTF San Carlos Apache Region, the San Carlos Apache Kid Child Care Center is also providing instruction in the families’ native language, Apache.​​​​ It’s one of the reasons April Noline enrolled her infant daughter Emma-Jean there.

“I was very happy that the teachers were teaching the Apache language in the classrooms,” Noline said. “It’s not something you hear every day coming from young children.”

The FTF San Carlos Apache Region has committed to providing opportunities for Native American children to learn and understand their culture, language, and connection to the tribal community.

In order to develop language and crucial pre-literacy skills, children need to hear words often, from a variety of caregivers and in a context that is meaningful. In addition, young children who have a strong foundation and are literate in their first language (the language of their family or community) are more successful in acquiring a second language.

Noline is pleased that her daughter’s language skills blossomed from when she was a baby to when she entered kindergarten. Now that Emma-Jean is in the first grade, she continues to use simple phrases in Apache and teaches her mother new words.

“It has been key in helping build Emma-Jean’s relationship with her grandparents, who are fluent in the Apache language,” Noline said.

Analla was on the FTF Summit’s panel discussion on language preservation along with Lucille Watahomigie, Hualapai Tribe and Beatrice Lee, San Carlos Apache Tribe. Analla pointed to community language classes, which provide a safe place for families to learn to use language in groups of 20-30 people.