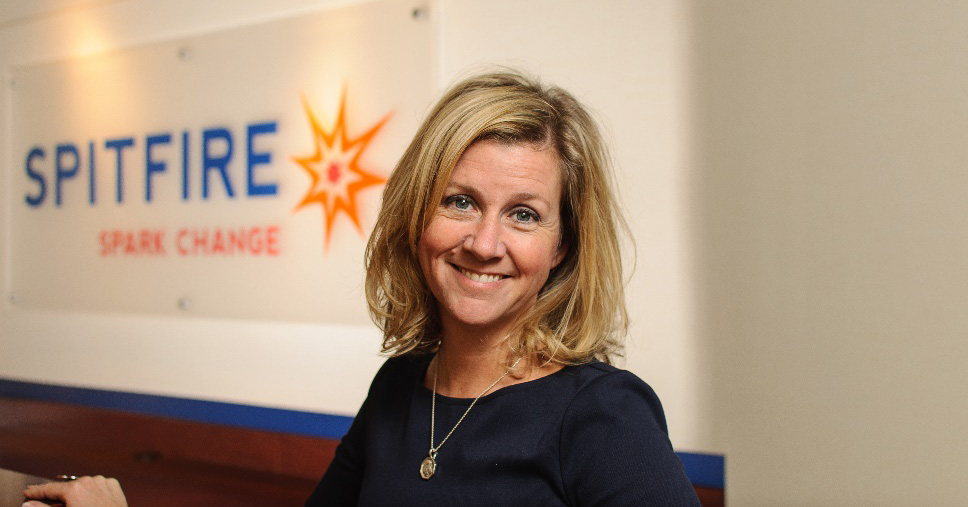 When you think of an advocate, do you picture a high-energy person making signs, marching, going door-to-door with pamphlets or people yelling at each other on the evening news? For many, advocacy seems like confrontational, time-intensive work, or even a contact sport.

Kristen Grimm, who has helped hundreds of nonprofits and foundations develop winning social change campaigns through her company Spitfire Strategies, has a different idea of advocacy.

Grimm is the opening keynote speaker for the First Things First Early Childhood Summit 2019 in August. She sat down with First Things First to share her ideas about advocacy and how creating social change can be empowering and rewarding for so many people, including early childhood supporters.

Is being an advocate in 2019 an effective way to create change when there are so many competing causes? Can you really get your voice heard?

Advocacy is one of the most effective ways to create social change. Democracy relies on people standing up for what they believe in and taking action. Elected leaders make decisions partly on what they hear from people online, in letters, at town halls and in everyday places like the grocery store. Even a seemingly unilateral decision, like Dwight Eisenhower integrating the armed forces, can occur because someone advocated for it.

Advocacy shouldn’t be a separate activity, but an extension of what you would do anyway. For example, if a business leader cares deeply about building an inclusive, prosperous community, she has many forums to talk about it. She should talk about job training and education to the local Chamber of Commerce meeting, PTA or start-up incubator. People have standing and influence in places they might not expect—and their voice will matter on the issue. Advocating from a well-established position, be that as a parent, a volunteer sports coach or an entrepreneur, lends credibility and trust to your argument. These things are in short supply today and they help cut through the noise out there.

First, it’s important to understand and define your role as an advocate. Advocacy happens in a lot of different ways, from going to Capitol Hill to knocking on doors. It might also mean connecting people, opening doors or starting critical conversations. There is no one type of advocate. The most effective advocates speak from an “I” space. I have seen … I know the power of … I know together we can. Focus on being authentic and not pretending. This brings me to my second point.

Get your story straight, so people understand your intentions and where you are coming from. When you tell the story of how you came to an issue, why you think we should all get involved and why now is the time to act, you’ve taken an important first step toward mobilizing people. Here is the teacher Clint Smith explaining why he is going to speak up as a model for his students.

Third, aim for conversations before conversions. Advocacy is about being motivational, not confrontational. When you engage with other people, let them explore the topic for themselves and consider new possibilities. You want to create a safe place where this can happen. Have you ever said, “After that person condescended to me and yelled at me, I really came to understand their point of view?” Of course, not. Effective advocacy isn’t about having the answer and convincing others you are right; it’s about generating conversations, finding common ground and coming to an answer together.

Last, be ready for pushback and don’t let it stop you There are a lot of trolls out there. You might be talking about standards for early education and people will get on social media and call you names or question your integrity. Let their attacks roll off your back. They don’t really know you, so don’t take it personally. You know what you want to do and what your priorities are. Go about advocating in a respectful way and have the courage to be engaged in what you care about. Your conscience is a powerful force. Use it to guide you. Martin Luther King Jr said, “In the end, we will remember not the words of our enemies, but the silence of our friends.” Don’t let anyone silence you once you’ve chosen to stand for something. Silence is a choice, just like advocating is a choice. Consider what your silence means and how it is interpreted.

Can you give an example of specific change you’ve witnessed through effective advocacy?

This was smart for a few reasons. First, the organization set an ambitious goal that people could rally around. Second, it gave the people affected by this issue a voice. It tapped farmers, parents and kids to get involved—to be advocates. It also made the decision makers, in this case, the nutrition directors, the heroes of the effort. Those who made a good decision were eligible for the Golden Radish, an award given to local education agencies in Georgia who are doing extraordinary work in farm to school. By building pride into the campaign, Georgia Organics has districts trying to outdo one another on providing local, organic food to students. The campaign caught on so quickly that it changed its name to 5 Million Meals and Beyond to keep it going.

If someone is interested in becoming an advocate, what is the first step you would recommend?

Start with an issue you are passionate about and in a position to influence. For example, “I need to get more local food served in my school.” When you focus on your part of the world and use your position to make things better, you’ll see the power you have. As you get more comfortable, you’ll find there are many ways every day to use your voice and experience on issues that matter to you. It’s an empowering feeling. Then you can join with others and take on bigger decisions.

And it’s usually necessary to join forces with people who are different from you to make the change you want. At the end of the day, advocacy is problem solving. See yourselves as problem solvers in your community. But to problem solve effectively, you need to work with people who have different opinions and have different lived experiences. Find your common purpose, then develop solutions that move the community forward. Change isn’t easy, but it is necessary. Advocacy is about building relationships, working through tough challenges and having a deep well of optimism that we can figure anything out if we set our minds to it. When someone says change can’t happen, be inspired by what James Baldwin said, “Those who say it can’t be done are usually interrupted by others doing it.”

Renee Targos is the director of brand advancement at First Things First. You can reach her at rtargos@firstthingsfirst.org.​