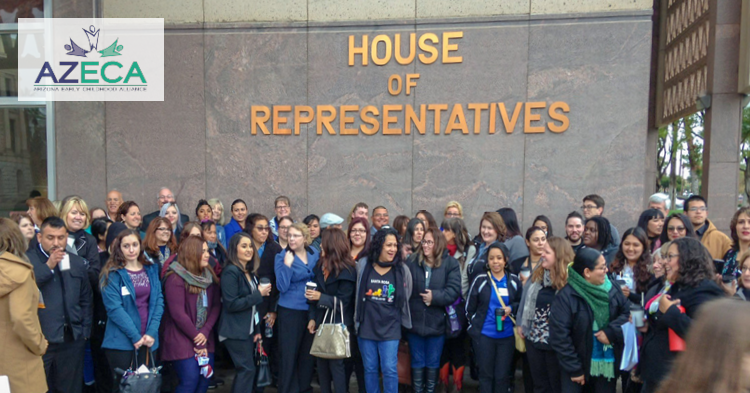 A rainy start to the third annual Early Childhood Legislative Day at the Arizona State Capitol on Feb. 21 didn’t deter hundreds of early childhood backers from across the state from showing up and showing their support.

The event sponsored by the Arizona Early Childhood Alliance (AZECA), of which  First Things First (FTF) is a member, provided an opportunity to share with policymakers why early childhood is critical to the future of our state and how it links to shared priorities, such as healthy children, strong families, greater academic achievement and increased economic development.

During the event, about three dozen in-office visits between constituents, stakeholders and legislators took place, where legislators heard from residents in their districts about how early childhood investments positively impact their communities.

Throughout the morning, AZECA members offered sessions such as one from Arizona Association for the Education of Young Children’s Executive Director Dawn Wilkinson on tools to help make your voice heard.

“When a real person stands in front of a legislator and tells their personal stories, it can make a difference,” Wilkinson said. “You’re letting them hear what an impact you’re making in a child’s life.”

The day was highlighted with a legislator panel with Rep. Michele Udall, Rep. Reginald Bolding and Sen. Heather Carter. Nationally-recognized advocate for early childhood, Art Rolnick, was also part of the panel.

Rolnick, who is an economist and a senior fellow at the Humphrey School of Public Affairs at the University of Minnesota, told the audience that the best public investment that can be made is to invest in children birth to age 5. He pointed to studies that show early childhood investments have up to an 18 percent return on investment.

“We want policy makers to think of early childhood as economic development,” Rolnick said. “It’s the best public investment we can make.”

Rep. Udall told the early childhood supporters to tailor their early childhood message when speaking to policymakers. “What’s important to them?” she asked. For example, if the policymaker is a strong backer of K-12 education, show how it prepares students for school, if it’s economic development, talk about the return on investment or how quality early childhood education helps break the cycle of poverty, she said.

Thank you @seanbowie for taking the time to meet during #AzECDay and showing your support for SB 1242 which will help Arizona’s young kids and their families access quality childcare #azleg pic.twitter.com/rBYHzz64jG

The Arizona Early Childhood Alliance is an alliance of 40 cross-sector partners statewide with the goal of ensuring all Arizona children are prepared for kindergarten and on track to succeed by the end of third grade.

Spent this rainy #AZEDay w/ other providers, advocates, and teachers to push for better outcomes for Early Childhood Education within the state. Thank you to @reginaldbolding @seanbowie @recobbforazrep @Jennifer_Pawlik and the many others who advocate for #ECE everyday! #AZECA pic.twitter.com/juCuwskMlu