A father’s reflections on the first year with three boys 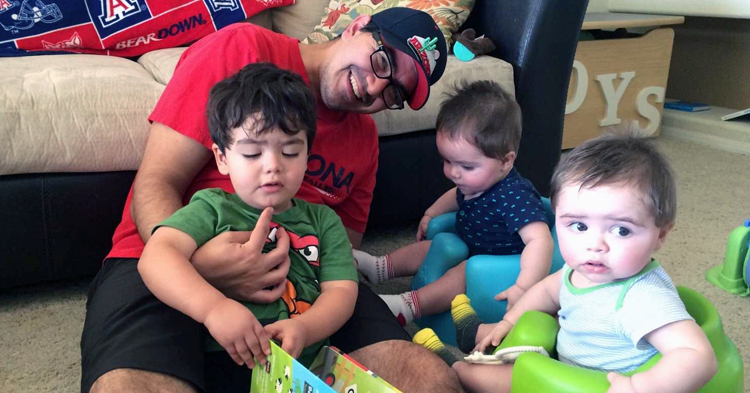 This Father’s Day, not only will I be celebrating the joy of fatherhood, but I’ll be breathing a sigh of relief as it also means I’ve made it through a whirlwind year with three boys under age 2.

My older son, Javi, was just 18-months-old when his younger siblings, Diego and Mateo, were born. Now that my twins have celebrated their first birthday, this Father’s Day I’m taking time to reflect on that busy first year with infant twins and a growing, active toddler.

Parents who have been in similar situations know that despite all the preparation you might do before hand, it’s not until you actually bring your twins home that the reality of how this will change your family really hits.

Twins don’t run in either my family or my wife’s family. So, when we first learned that we’d be welcoming two new additions into our little three-person family, we didn’t know what to expect. My mind was just spinning for a couple of weeks and it took a good month to really sink in that we would soon have two newborns to care for, while also chasing a toddler around.

Of course, we had gone through the first year with Javi, but obviously with twins we had a lot of questions. Mainly things like – how do we get twins on the same feeding and sleeping schedules?

Even with working at an early childhood organization like First Things First for the past five years, I knew this experience would challenge everything I’d learned. It helped that my wife is an educator, although working with tweens in middle school is a lot different than handling infants and toddlers. We have to be on our game, since we’re kind of outnumbered now.

The main thing I’ve learned over the last year is patience. With three little ones that all need you – and your attention – it can get overwhelming, especially when they might be hungry or need changing at the same time. It’s important to remember that they’re just acting their age.

Most importantly, over the last year, I’ve also learned to appreciate moments with each of my boys because this time goes by so fast. We make an effort to give each of the boys the individual attention they deserve and enjoy seeing how each of our sons is growing and developing in their own way.