Tucson dad learns how to help son be ready for kindergarten 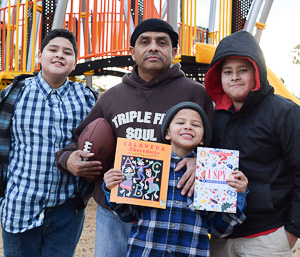 Miguel Cortez of Tucson has three sons, twins who are in sixth grade, and Christopher, who started kindergarten this fall. Although all of his children participated in the Parents as Teachers program, Cortez said it was different with Christopher.

“Their mom was the one who participated in the program with the twins, but now we have separated and I have the kids,” he said.

Cortez and Christopher, who live in Tucson, enrolled in Dad and Me, when the boy was 3. The set of Dad-based parenting classes is organized by Parents as Teachers and funded by First Things First.

“I learned how to better interact with my kids and to be interested in what they are interested in,” Cortez said. As he noticed Christopher getting more into books, colors and letters, the PAT coordinator made suggestions of things Cortez could do with his son.

For example, if they were at the grocery store, Cortez would have his son help put together the grocery list. Once they arrived, Cortez would ask his son questions as they shopped. “What letter was that?” he’d say as he pointed to a box of cereal.

The Dad and Me program also had a profound effect on how Cortez viewed his role as a father.

“The class is just for dads; moms can come, but they sit along the side,” Cortez said. It was different than the culture that Cortez grew up in, where the father worked and the mother took care of the children.

“I got more involved because of PAT,” Cortez said. “Work used to come first for me, then my kids, but now my kids always come first. The program confirms family, that we are better together.”

Cortez credits PAT with instilling his children’s love of reading, knowing how to behave in school and helping them develop self-control.

When Christopher started kindergarten he could count from 1- 100 all by himself. He was one of only three children in his class who could do it.