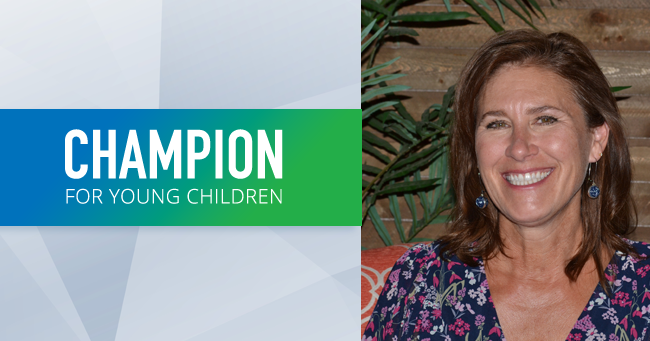 Tina Nation has been selected as the 2022 First Things First Coconino Region Champion for Young Children.

The award is given to local champions who actively volunteer their time to raise public awareness of the importance of early childhood development and health.

Nation, who is a speech and language pathologist, connects families across the Coconino Region to the FTF-funded Birth to Five Helpline as a way to support caregivers who are looking for advice and resources in their community. Nation also raises awareness about First Things First by connecting other speech and language pathologists to FTF’s early childhood information so that other professionals in the area understand how to support families with various needs beyond the child’s speech delays.

Over the past year, Nation has helped families understand the importance of early intervention in speech delays. In her work as a private speech pathologist, she has referred families to resources using First Things First as a starting location for families. During her visits, she shares information about resources in the community that help connect families to essential needs like where to get food and diapers. She works in multiple communities across the FTF Coconino Region, making sure that families understand how important the development of the whole child is. Additionally, in her networks of other speech and language pathologists, she consistently encourages everyone to have a good idea of what typical development and milestone moments are, so that everyone is influenced to be strong advocates for early intervention.

We recently caught up with Nation.

QUESTION: Why do you think it’s important for people in your field/position in the community be a champion of young children and families?

ANSWER: I think it’s really important for people to have a good idea of what typical development is and where to go for resources, even just a general idea. Even though my job was speech-language pathology, the family might be out of formula or diapers so how are they supposed to implement this fun speech game if the baby doesn’t have a dry diaper. If everyone can just think of a single resource, just start with that one phone call, it’s likely that the family will then be connected to other resources they need.