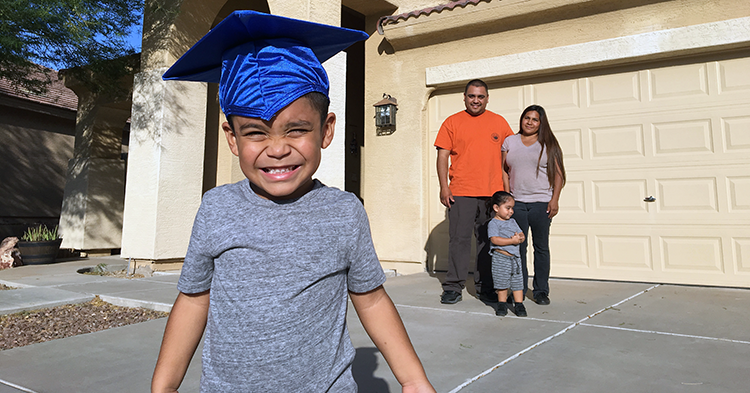 When Eduardo Jr. and Margarita Lino started looking for child care for their 2-year-old son, Albert, they didn’t know what to expect.

Their neighbors had told them of an in-home child care center that offered scholarships for eligible families.

“My first thought was it would just be another place that watched kids, Margarito Lino said. “I was wrong, it was much more. I soon realized that I wasn’t just leaving my child to be watched, I was putting Albert in an environment where he would be nurtured and exposed to early learning.”

With help from a Quality First scholarship, the Linos enrolled Albert at Deshika Perera’s licensed in-home child care in Buckeye, which serves children ages 1 to 5. Perera’s center participates in First Things First’s signature program, Quality First, which uses research proven methods to create nurturing, educational and social environments so children can be prepared for and succeed in kindergarten.

“In the beginning, Deshika would send us text updates and pictures, this really put our minds at ease and helped in the transition of leaving our first born in a new environment,” Margarita Lino said.

The Linos soon began noticing changes in Albert’s desire to explore and his good manners. He also always wanted to learn more because his mind was being stimulated.

“It has helped the boys so much,” Eduardo Lino said. “They have gained so many tools, and we see the difference. They are so smart. But you also have to do your part. Learning begins at birth and you must continue the positive interactions at home. It is a shared responsibility.”