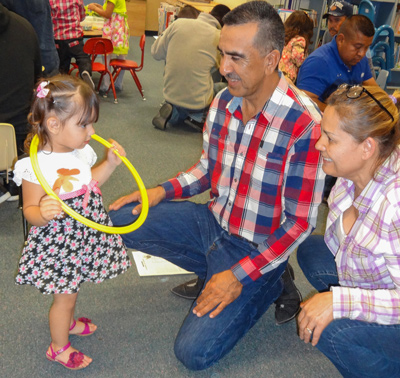 Samara hesitated at first, but with the encouragement of her dad, the toddler soon began clapping her hands and swaying to the music. She was among dozens of other youngsters whose fathers cheered them on to the dance floor during a Dad & Me evening at Ocotillo Learning Center in Tucson.

Dads and kids spent an hour playing, dancing and singing together. But what the little ones didn’t know is that spending time with their fathers, as they did on this occasion, is considered a key factor in the social-emotional development of children. Research shows that quality father child time increases self-esteem, confidence, social competence, and life skills in a child’s early years.

“When dads are involved with their children, kids have better peer relationships, and they stay in school and graduate,” said Joan Katz, Parents as Teachers coordinator. First Things First partially funds the Parents as Teachers program, which runs Dad & Me.

Dad & Me activities encourage interaction between parent and child while at the same time offering an opportunity to share educational information with parents.

“The fathers are learning that it’s important to read to their children,” Katz said. “If they go out and throw the ball around, come in and afterwards read a book together.”

Some 30 fathers and their children were at Ocotillo recently, and they all left with a message that resonated throughout the hour.

“Dads are important from the start.”

Urias said he knows that being involved in Hyram’s life will give his son an edge and he intends to continue doing so after his boy starts school, just as he has with his two older sons.

“By being involved in their education and activities, I’ve learned a lot about my children,” he said. “There’s trust between us.”