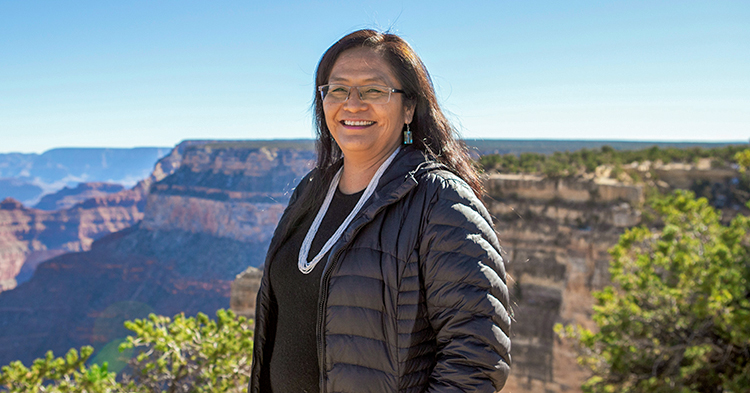 “The work I do is for the future children of the Grand Canyon, and for all my ancestors who endured the hardships of life in a remote canyon,” Tilousi said. “I am honored to tell our story.”

The First Things First Board in February approved Tilousi to serve on the FTF Coconino Regional Council as the tribal representative on the council.

Tilousi has worked for more than 25 years promoting social and environmental justice for the Havasupai Indian Tribe and Indigenous Peoples of the Grand Canyon. Serving on the Havasupai Tribal Council, Tilousi has confronted the major issues of the day by improving the legal and financial infrastructure of the tribe to better address societal and environmental threats.

Tilousi brings the Havasupai tribal perspective to the FTF Coconino Regional Council. The regional council is made up of 11 community volunteers who help define priorities for the local services and supports for young children birth to age 5 and their families. Through this collaborative work, they provide opportunities for young children to get a strong start in life.

Tilousi appreciates the opportunity to help others better understand the traditions and story of the Havasupai Tribe as a member of the FTF Coconino Regional Council.

“For example, when a Havasupai child is born, the mother and child are supposed to stay inside for 30 days to allow the child to adjust to the world,” Tilousi said.  “After the 30-day period, the child can be taken outside with their head facing east in the sunlight.  Additionally, when their umbilical cord sheds, the cord is wrapped in buckskin and red ochre and placed above the child’s cradleboard.  These are important milestones for the family to commemorate with the traditional teachings of the Havasupai people.”

She also works to make sure that early childhood services are provided in a way that honors their traditional way of being. Tilousi recommends adjusting words and phrases such as “therapy” to have a more communal orientation.

For example, one might say “family gathering” instead of “therapy,” she said.

“It’s important for non-tribal people working with tribes to consider how they can best work with and honor the sovereignty of the tribe as opposed to the tribe making adjustments for non-tribal partners,” Tilousi said.

The Havasupai have lived in Supai and the region of the Grand Canyon for millennia, knowing what’s best for the Havasupai people, she added.  Non-tribal people who hope to work with the Tribe should do an orientation to Havasupai customs as well as review the laws they’ve put in place to keep their community safe, she said.

“We’ve had our ways of taking care of things and those have suddenly disappeared, but I think we can revive them,” Tilousi said. “This is why it’s important that tribal members’ needs are given priority.”

Through a unique tiered governance structure, FTF has engaged hundreds of volunteers to serve on the Board and regional councils and make decisions about how early childhood funds are spent in their communities.

In addition to Tilousi’s work in advocating for Havasupai’s youngest children, she serves as an ambassador for the Havasupai Tribe by presenting their environmental and justice issues to the world. She served as a delegate to the United Nations in Geneva, Switzerland, and has also presented the Havasupai uranium case at the World Uranium Hearings in Salzburg, Austria.

Tilousi assisted the defeat of a proposed nuclear waste dump in Switzerland, which had direct ties to proposed mining activities in the Grand Canyon region. Tribal members, including Tilousi, and Tribal Council were also engaged in a protracted legal dispute with Arizona State University over alleged improper human subject research conducted by the University officials against the Havasupai people, resulting in a groundbreaking settlement.