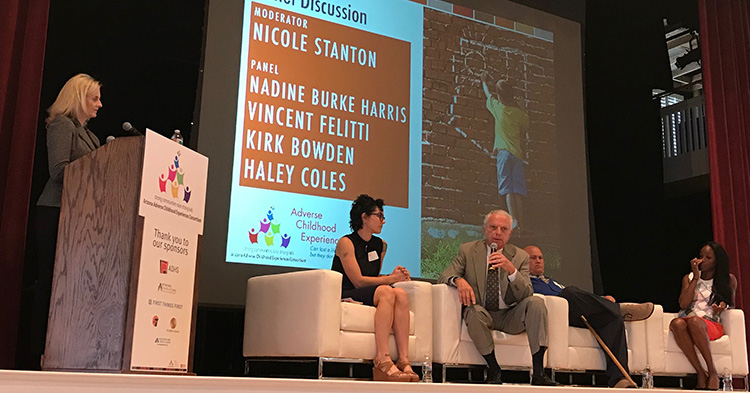 The research is clear: positive early experiences help set kids up for long-term success. But recently, new research shows that the converse is also true – negative early experiences can negatively impact later physical and mental health. National experts recently visited Arizona to share how everyone can do their part to help prevent or lessen the impact of adverse childhood experiences, known as ACEs. Helping young kids get a good start is key.

“Nurturing caregiving during the early years of life can improve health later,” said Dr. Nadine Burke Harris, one of two nationally-recognized experts who spoke at the Oct. 3 Arizona Adverse Childhood Experiences (ACEs) Consortium in Phoenix. She is founder and CEO of the Center for Youth Wellness in San Francisco and a pioneer in the treatment of toxic stress.

First Things First, a member of the consortium, sponsored the group’s fourth annual ACEs Forum to help bring Burke Harris and Dr. Vincent J. Felitti, co-principal investigator of the groundbreaking ACEs study to Arizona. This collaboration coordinated by Phoenix Children’s Hospital works to raise awareness about the lifelong impacts of ACEs and to support initiatives to prevent or mitigate their effects.

These adverse childhood experiences include nine types of childhood trauma ranging from household dysfunction to abuse. These frequent or prolonged adverse experiences are sources of toxic stress, which can harm children’s developing brains so acutely that the effects show up decades later.

As the number of ACEs in a child’s life increases, so does the likelihood of cancer, depression, diabetes, alcoholism, smoking, heart disease and other conditions that often show up in adulthood. The more negative experiences early in life, the greater the risk. Burke Harris outlined what everyone can do to combat ACEs: raise awareness, work for early detection and prompt intervention, reduce adversity and enhance the capacity of caregivers to be a buffer against adversity.

“We can mitigate the impact of ACEs with early intervention,” she said. Responsive caregivers and supportive communities can break the cycle and reverse the impacts of toxic stress, she said.