Pinal brothers use Fun Van to prepare for kindergarten 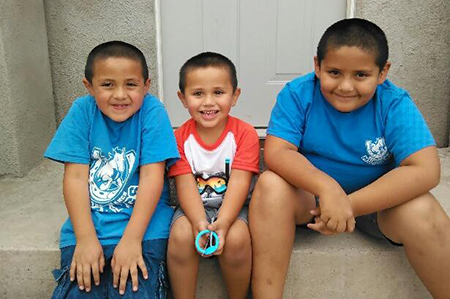 “All of the boys were shy and quiet in the beginning,” said Fun Van Parent Educator Felicia Smith. “Not a lot of talking at first. They have all come out of their shell now and seem comfortable interacting with others.”

Smith has known the boys and their mom, Yolanda Macias, for more than five years, since Macias signed up for parenting education classes, such as Fun Van, offered at Pinal County libraries. The van travels throughout the county offering programs such as Raising A Reader and Early Childhood STEP, which teaches helpful techniques to improve family communication and encourage cooperation, plus effective discipline strategies that promote self-esteem and mutual respect.

As the boys were engaged in literacy, Macias learned how to make reading exciting for her sons. It also helped with discipline.

“If they throw tantrums, don’t yell,” she said. “They teach you how to talk and use your words, and to say ‘no’ in a different way, and explain why you’re saying, ‘no.’ For example, ‘you’ll get hurt.’ It helps make you a better parent.”

Macias expects that youngest brother Feliciano, who is now 3 years old, will also see similar success as his older brothers once he reaches kindergarten.

“He had an awesome kindergarten year becoming a good reader and writer,” Henness said. “His math skills were solid. Trellus had wonderful family support as well.”