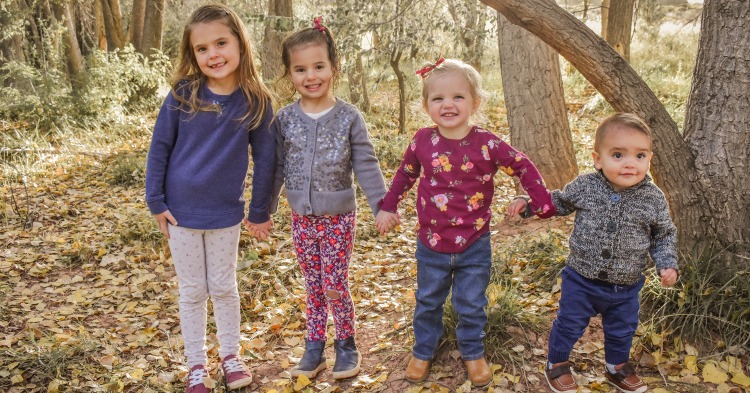 Jenn Russell, a mother of four children under the age of 6, was delighted when she learned of parenting programs being offered at the Snowflake-Taylor Public Library.

She was interested in finding activities and resources local to her area that would benefit her children’s development. The First Things First Navajo/Apache Regional Council funds the Arizona’s Children Association to host programs such as Kinder Prep and Brain Time at the Snowflake library.

Parents and caregivers can attend the classes with their children, while they learn about important development strategies.

“I really enjoyed seeing my kids’ excitement of new information, interacting with other kids, and learning new social skills,” Russell said. “My daughter, Mallory would ask me ‘is it my Kinder Class time yet?’ because she was so excited to attend!”

Mallory loves routine and leans toward patterns in her environments, Russell said. She found comfort in the routine of the class opening with the same hello song, and closing with the same goodbye song each time. Mallory’s confidence was boosted and she began coming out of her shell to socialize with the other children more as she learned the importance of routine.

Russell watched her daughter become more social in the Kinder Prep class because of the feeling of stability created by routines she learned. These routines created an environment where Mallory spoke more with the other children and learned much more than just letters and numbers, she learned socialization and developed learning skills.

“One of my favorite things that the ‘Kinder Prep,’ and ‘Brain Time’ programs taught me was the more one-on-one attention I give to my kids, the greater their attention span will be,” Russell said. “We spend more quality time outside together and less time using screens.”

Kimberly Whitely, the parent educator with Arizona’s Children Association, said the collaborative classes provide parents and caregivers with creative ways to interact with their children to strengthen attention, bonding and communication skills.

“We empower parents with the tools and resources they need to be successful in helping their child to be ready to enter kindergarten,” Whitely said.

For Russell, the classes gave her a better understanding to help with her other children, such as how to handle her son biting those around him.

“They helped give me a different view of how to address it,” she said. “I learned to have a conversation with my kids. I began being proactive and intentional before and after the behavior occurred. I would remove my son from the situation after he would bite, and then stop to show him how his behavior hurt or caused an ‘ouchie,’ to someone else.”

Russell, who teaches preschool in her home, found the information taught in class about brain development enlightening.

“The classes taught me how to use household items in a creative way to teach and stimulate a child’s growth,” Russell said. “The use of everyday household items made it easy to talk about things we were doing together like cooking, and turn it into a creative learning experience.”

Mallory is now in first grade and excelling as a student. The Kinder Prep class prepared Mallory to enter kindergarten confident and excited to learn academically and socially, Russell said.

“She started out on the right foot because she went to Kinder Prep class that helped prepare her for a learning mindset,” she said.