Grandparents rise to the challenge 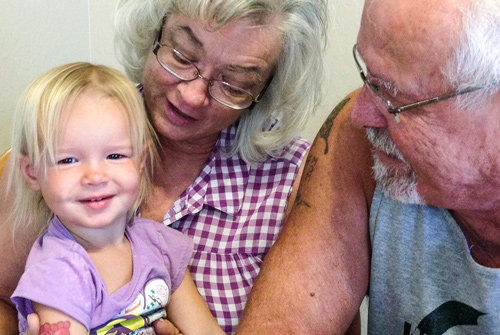 Proud parents of two young girls, Katelyn Redlin and her husband live in Maricopa but work during the day in Chandler. Soon after their second child, Brooklynn, was born in 2012, the couple quickly found it difficult to manage the schedules of work, preschool and child care.

Katelyn’s parents, Mike and Karen Redlin, were retired and living in South Dakota at the time, and Katelyn had an idea: What if they moved to Arizona and helped take care of the children? It was April at the time and the weather in the Valley was perfect, a stark contrast to South Dakota in the spring.

“The decision was easy,” said Mike. “A chance to be closer to family and be a part of the lives of our grandchildren was something we couldn’t pass up.”

So the Redlins moved to Arizona and started caring for Brooklynn and her older sister, Olive, while their parents were at work.

The newfound excitement of looking after their grandchildren was soon replaced with anxiety and nervousness at the responsibility they had taken on. It had been more than 20 years since Mike and Karen had cared for young kids, and they weren’t sure they had the skills they needed.

They soon discovered a program in their community that would help them develop their abilities to support the early learning of Brooklynn and Olive.

The Family Friends and Neighbors Caregivers Outreach Assistance Project (FFN) was created with a grant from First Things First to help those caring for children other than their own in the home. Families enrolled in the program, which is administered by the United Way of Pinal County, attend trainings and group connections to enhance their interaction and approach to child care. They can also qualify to receive educational materials to use at home.

Pinal County has one of the highest percentages of intergenerational families living in the same household in the state, and more than 90% of young children in the county are cared for in homes rather than early childhood centers. The FFN Project was designed to meet the unique needs of the early childhood landscape of the region and has been instrumental in helping many families obtain certification for licensed in-home child care.

For Mike and Karen, the program was exactly what they needed.

“All the tools they give you, best practices for interacting with the children, going to all the trainings… You learn a lot in a short amount of time,” said Karen.

​​After a year in the FFN Project, the Redlin’s interaction with their grandchildren is extraordinary.

“We ask her open ended questions, get her mind working, and listen to her,” said Mike while Brooklynn sat in his lap and traced the outline of his hand. “We let her speak and kind of sort through her own thoughts without us prompting any answers.”

With the help of First Things First and the Family, Friends and Neighbors Project, the Redlins are ready for whatever their grandchildren may throw at them, and they relish the opportunity to help during their early childhood years.

“We worked a lot throughout the early years of our children’s lives,” said Mike. “Looking back, we probably would have liked to have spent more time with them. I think it’s why, even though we knew we would be challenged, we took on this responsibility.”