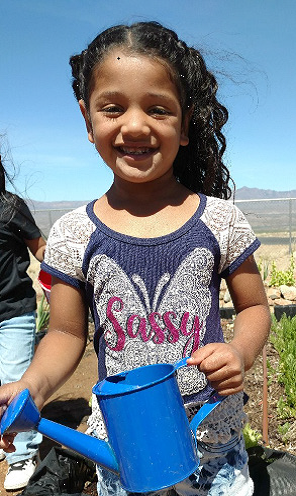 Gardening became an adventure for young Kelsie Garland when she was introduced to it at Head Start in Bylas.

Kelsie was part of a garden program called Grow it, Try it, Like it!, a garden-themed nutrition education program where young children plant garden vegetables that they eventually harvest for meals.

The program is funded by the First Things First San Carlos Apache Region through its nutrition, obesity and physical activity strategy and is implemented by the University of Arizona’s Gila County Cooperative Extension.

The children begin in winter by plantings seeds, then transplanting the seeds into raised garden beds. They plant spinach, tomatoes, melons, squash, carrots, peppers and onions as well as learn about peaches, strawberries and sweet potatoes. By summer, they harvest the vegetables and start over again. Also included are nutrition lessons and taste testing the fruits and veggies.

“The gardening program has helped us learn to be more active outside and make healthier food choices as a family,” said Andrea Mitchell, Kelsie’s mom. “Now Kelsie is more aware of how making good choices such as fruits and vegetables impact her ability to run, jump, play and have energy.”

Now in kindergarten, Kelsie and her family continue to enjoy being outside in the garden, as well as making healthy food choices.

“Kelsie did not like onions before, but after talking to her about how good it was for her body, she tried it and said, ‘Mom, I do like onions!’,” Mitchell said. “Now we try to incorporate more fruits and vegetables into our daily diets.”