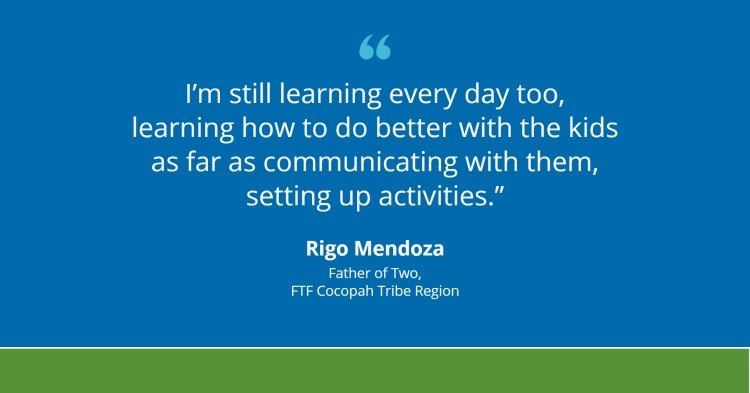 As his two children got older, Rigo Mendoza grew concerned about their development. At 3 and 4 years old, Leia and Xander did not speak and were deeply shy around other people.

Mendez knew it was time to seek help.

Soon, the two children were enrolled in the Cocopah Early Steps Program, which supports families through voluntary coaching and in-home visits that offer family support.

“Basically, when I stepped into the program was when it really started the process of trying to get them help,” Mendoza said.

Steffany Ritchie, a former Early Steps specialist who held regular visits with the family, said neither child was verbal at first. They also became anxious when their father was out of sight.

“They were having attachment issues,” she said. “Dad could not be away from their side or even in another room, they were not comfortable around strangers.”

After several months of home visits, the program referred the siblings to other community resources. Leia and Xander underwent evaluations and received an autism diagnosis. They then were able to connect with services that provide treatments such as speech therapy.

“We also got them enrolled into the public preschool system for children that are developmentally behind to try to help also get them on track before school age,” Ritchie said.

Mendoza, a widower, credits the program for “really getting my kids through the initial stages of being more social and accepting of other people. They don’t fear people anymore.”

Since his children first arrived in the program, their communication skills also have improved markedly. Leia has started to say some words and both children are using sign language.

“They effectively communicate their needs and wants now,” the father said. “But again, all that’s a work in progress because there’s still a lot of things that they need to work on, but that’s what stands out, their communication is better. I’m still learning every day too, learning how to do better with the kids as far as communicating with them, setting up activities.”

Preschool, which the siblings began attending separately some months after the start of home visitations, has been another milestone for the children. Xander, now 5, eagerly hops on the school bus every morning and Leia, 4, does the same in the afternoon.

“If we had tried that in the beginning stages, that separation would not have probably happened at all,” Mendoza said.