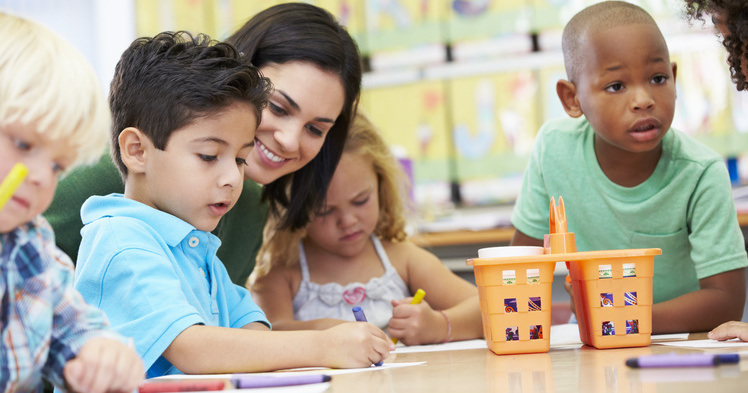 Few things get Amy Corriveau riled up in her professional life as much as the term, daycare.

She shuddered as she said, “I hear it in movies, on TV shows. People will say daycare. We are trying to help families understand that we don’t take care of their day. We are taking care of their children.”

Seeing the word daycare also conjures images of a place that is keeping children safe and healthy, but not much else, said Corriveau, who is First Things First’s Chief Program Officer.

“Child care implies that something is happening in the environment to help my child develop and grow. Something more than basic housing,” she said.

The word daycare dates back to France in the mid-1800s as a means of caring for the infants of working class women, according to the New World Encyclopedia. During World War II, the first U.S. government-sponsored child care was created after women were encouraged to join the workforce as their husbands went off to war. The subsidized care ended in 1947, when the veterans returned and the women were forced to give up their jobs, but the terms daycare and child care have been used interchangeably since then.

Today, the word daycare can be polarizing for those who work in the early childhood education profession.

As the early childhood education industry evolves, there are many descriptions to the type of care and education for babies, toddlers and preschoolers. And with heightened awareness about the rapid and critical brain development that happens in the first five years, there’s more focus on professional development for those charged with caring for young children.

Barbie Prinster, who leads the Arizona Early Childhood Education Association, reflected on how much has changed in the last few decades, from the time when she was hired with no training in 1991 to teach a classroom of 3-year-old children.

“We don’t do that now,” Prinster said. “We give people the tools and knowledge they need because now we know more about how important that teacher/child interaction is.”

As that understanding continues to grow, the word daycare has less meaning. “The next step is for parents to understand here’s what we’re doing. Here’s how we’re teaching your children,” she said.

Caregivers who know that the first five years build the foundation for later academic success, work hard at creating positive interactions with the children in their care.

“They are doing something that will help that child grow and develop,” Corriveau said.

“The words we use are powerful and show our values about early care and education,” said Bucher, who is the chief executive officer for the Arizona Association for the Education for Young Children (AzAEYC). “The careful choice of words influences what we — and others — believe and think about our work. The phrase child care is reflective of our belief that all of us are obligated to take care of young children, because they are children, and care is what they deserve. We cannot separate the care from the child or the child from the care. Child care is a public good. The phrase child care highlights what’s at the heart of our work — our community responsibility to care for every child.”

Experts in the field emphasize that there is a difference between the formal system made up of early childhood educators, and the informal system, which families may refer to as babysitters.

“The word daycare doesn’t have any meaning,” but the words “early childhood education program” are clear, she said.

The next step is getting parents and those outside of early childhood to understand.

“I think our industry understands the difference, but the outside world doesn’t understand it until they need it,” Prinster said.

For example, working parents of a new baby might not know anything about what type of child care they’ll want or need.

“They won’t understand the wording until they start researching, do you want an in-home provider? Do you want a nanny? Do you want to take them to a center?” Prinster said. “This is the evolution of language that our industry has taken on. We want the industry to be professionalized and respected. We’re getting there, but we’re not there. By using terms like child care and early childhood education, it will better reflect the work that is going on in the field.”